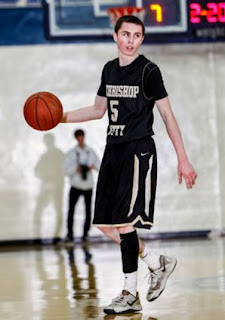 When a love for the game of basketball is demonstrably palpable, rather than just solely verbalized, it's an exhilarating and contagious experience. Watch 6-foot-1 Foothill College guard Matt McAndrews for just a few minutes, whether it be in an actual game or practice or even in a pick-up setting and his fervor is everpresent. Heck, just talk with him for a while and it's apparent his hoops spirit comes straight from the heart.

However important that is to being successful, there is so much more to McAndrews.

He comes from a very successful program at Archbishop Mitty, one that went 86-14 during his varsity tenure. The Monarchs won a state championship in 2012, lost to Mater Dei in the title match the following season and then fell to Capital Christian in the state semifinals. "I didn't have to score a lot because we had so many options and so many scorers," McAndrews recalled.

He then moved over to Foothill College. "While I was at Mitty, I was kind of small," he explained. "College ball is physical so I didn't play first year (at Foothill)"

In his second year as an Owl, McAndrews was all set to go. "I got my weight up and was playing in the San Francisco Pro-Am. But right after our summer tournament, I was playing in a park, went up to dunk and got undercut. I landed on my neck and fractured it."

"Being sidelined for me was really, really difficult. I had never been injured and here I was in bed for two or three weeks. It was a big blow mentally and I was depressed.

There was an upside

"I learned I really love basketball -- this is what I want to do. But I also learned there's a lot more to life than basketball. I use it as a tool to be successful in the future. I've met so many people because of basketball, whether it be at Foothill or the Pro Am and adult leagues and I love it." 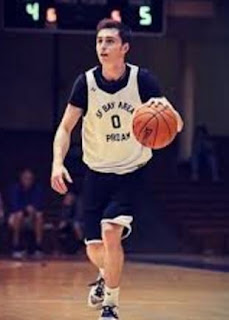 He returned to the court this season for Foothill and quickly put up eye-catching numbers: 18.1 points on 49%, 43% and 80% shooting, 3.4 assists plus 3.1 rebounds in his first seven games. However, he was slowed by two hernias and two tears in his lower abductors and decided to get those ailments resolved. He earned a medical redshirt and still retains four years of eligibility.

"I'm just happy to be playing still. I'm still in the gym everyday and it's the most fun I've had. I've been playng since I was seven or eight and I'm 21 now and finally realizing my potential."

What's the genesis of his overall enthusiasm?

"My Dad hardest worker I've ever seen. He's the guy who got me into basketball and a reason I still play. He helped in me learning about the game and seeing him work in his craft makes me work on mine. He knows what to do to be successful and I'll end up being successful if I use the same formula."

There's also this: "Part of it comes from my coaches over the years. [Foothill Head Coach] Matt Stanley, [Foothill Associate Head Coach] Jimmy Herrera. [Archbishop Mitty Head Coach] Tim Kennedy, my AAU coaches, they each put 100% into their teams. I am the same way with the same mindset. Their dedication makes me want to get better and they have pushed me towards thinking I want to be a coach in the future. [During a game], I'll look over at Stanley and see we're on the same page, thinking the same thing. Our mind's kind of click. The confidence in me has pushed me to thinking about coaching."

"My job as a point guard is that I don't want them to coach as much as they do.
I want to be their coach on the floor. Give me the keys to the car." 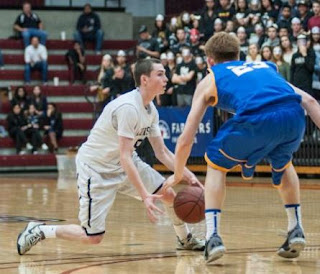 One element that aided McAndrews' leadership role this season is the tightness of the Owl squad. "Our team this year was one of the closest ever, 1-15 just really good guys. It's like a family with 15 best friends. We knew how to talk to each other and knew everyone's playing style. I went around meeting the guys on the team and my job was to make it easier, to help them play into their game. I want to be the type of player giving out shots.

"I would watch the high school tapes [of my teammates] and their playing styles. I learned what they did as seniors. The old tapes showed what they were and could be. I saw my job as raising their confidence like when they were back in high school and get them to play like that at Foothill."

About his basketball IQ, McAndrews offered, "It's a lot easier to develop when you're fully invested and around the same thing 24/7 continuously getting new information. I started watching a lot more film of my game and others because I'm always trying to learn new things, Nothing is forced for me, it's all natural and I love it. I also like math so it's fun for an hour and a half when I walk into math class."

However, there is one prominent line of demarcation separating him from his teammates and it runs through Cleveland. While citing Jason Williams and Steve Nash as inspirations, McAndrews is a huge LBJ fan. "My teammates hate me because I talk about him (LeBron James) all the time. I study his game and he's made me see the game slower. He plays basketball like it should be played and is the best ever at impacting the game without scoring."

Kevin McCarthy
I write to provide exposure to deserving basketball players, coaches and others, as well as to be educated myself. A day without learning is a lost opportunity. I'm always looking for more information so please send along news.Thank you.

Thank you for visiting